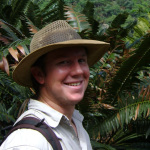 The effects of long-term burning regimes on savanna spider assemblages

My MSc research is based in Kruger National Park, South Africa and focuses on how different long-term burning regimes may affect spider assemblages across a savanna rainfall gradient. Sampling was conducted on the experimental burn plots that form part of the long-term fire experiment that has been ongoing in the park since the early 1950s. It is critical to investigate the effects of burning regimes on fauna and flora as fire is a crucial part of savannas and is often used as a management tool in conservation areas. To date, studies investigating the effects of burning regimes on invertebrates are few and far between, which is of concern as invertebrates have such pivotal roles to play in ecosystem functioning. I am supervised by Berndt Janse van Rensburg, Kate Parr and Mark P. Robertson.

Previous work that I have undertaken investigated the effects of altitude and season (dry vs. wet) on beetles along an altitudinal gradient in the KwaZulu-Natal Drakensberg mountains in South Africa.