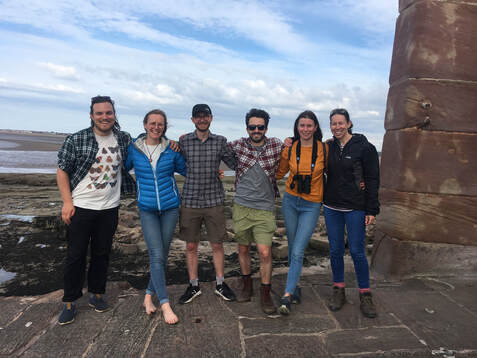 January 2021 - Very sad to say goodbye to our stupendous post-doc, Hannah Griffiths, but she moves on to great things with a Future Leaders Fellowship at University of Bristol. Wishing you all the best, Han!
We also welcome Jack Walker to the FunkyAnt Lab. Jack will be working on urban invertebrates, diversity & traits, and the processes they mediate.

December 2020 - Excited to be awarded an Australian Research Council Discovery Grant as a Partner Investigator to work on the ecological strategies of ants with Heloise Gibb (Principal Investigator), Nate Sanders and Tom Bishop. 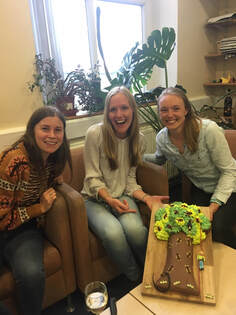 March 2020 - Final field campaign before #lockdown involved a lot of hard work in South Africa with a fantastic team from Oxford, Lancaster and Pretoria.

June 2019 - Another viva in the Funky Ant Lab. Steph passes with minor corrections! And is treated to a beauty of a cake by the two Alices (contenders for GBBO...Great Biodiversity Bake Off).

​October 2018 - James' viva! Only minor corrections. Bubbly all round.

December 2017 - Steph wins prize for her talk at the winter IUSSI meeting in York! Congrats on a great job.

October 2017 - Hannah back in the field for new Leverhulme funded project on community reassembly in Borneo, and Alice in South Africa for her first field season.

August 2017 - Ananza has first PhD chapter accepted for publication in Biotropica - well done! Steph, James and Jason up to their eyeballs in data analysis and writing. Kate and Hannah just back from successful final field season in Borneo.

Our Journal of Animal Ecology paper on resource removal by ants hits the headlines in the newspapers!

October 2016 - New South African project on the functional importance of savanna termites started with field visits and plot set-up. Amazing to see the drought-hit areas of NE South Africa. James back from the field - now for some serious data crunching!!

June - July 2016 - James back in Tanzania for second round of fieldwork. New National Geographic project on fire & wildebeest in Serengeti starts! Kate teaching on Ant Course in the beautiful Gorongosa National Park, Mozambique.

May 2016 - Kate in Ghana for new soils consortium meeting.
Other exciting news - Tom has passed his PhD viva! !

April 2016 - Kate in Gabon checking out new field sites for our exciting Royal Society-DFID project on fauna & African soils.
Good news! Kate has been awarded National Geographic funding to explore the functional similarities between fire and the wildebeest migration in the Serengeti.

October 2015 - Busy month with lots going on! James is back from Tanzania with bundles of data and sporting an enormous beard, while Tom has disappeared to the Drakensberg Mountains for some fieldwork with University of Pretoria students. We welcome Stephanie Law, a new PhD student, who will be working on canopy ants in Borneo, and we say a very sad farewell to Ananza who has come to the end of her year in Liverpool!

August 2015 - Busy month in the lab despite the holidays! Kate has been working on ant trait papers in Norway  with Heloise Gibb, James is still in the field in Tanzania, and we welcome two visitors: Elie Gaget from France working on fire and biodiversity responses, and Ricardo Campos from Brazil working on cross-continental comparisons of ant community structure. Welcome! 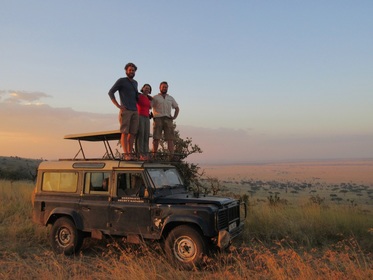 May 2015 - New lab member, Hannah Griffiths, joins as the postdoc on our Borneo project quantifying the functional value of ants and termites.
Tom's new paper on species and taxonomic beta diversity out in Journal of Biogeography.
James is in the field in Tanzania battling rain, flat tyres and grass identifications.

12/2/15 - Kate is appointed as Honorary Lecturer in the School of Animal, Plant and Environmental Sciences, at the University of the Witwatersrand, South Africa.

February 2015 - Jason Donaldson joins the Funkyant Lab! Based at the University of Witwatersrand in Johannesburg, South Africa with Sally Archibald, Jason will be working on our large-scale fire-herbivory experiment in Kruger National Park....and living in a tent for a year or so! 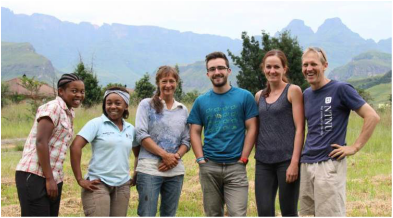 2/2/15 - Tom back from exploring ants up mountains in South Africa. Trip included sampling with SAEON at new sites in the beautiful Cathedral Peak, Drakensberg.

12/1/15 - Busy start to 2015 with Tom away in South Africa (collecting ants up mountains) and Kate in Australia for collaborations with Heloise Gibb at LaTrobe University.

5/1/15 - Ananza presenting a poster in Oxford at the Biodiversity Institute Symposium on biodiversity and ecosystem functioning.

4/1/15 - Great way to start the New Year with a new paper on methods for sampling termites in Insectes Sociaux from Cecilia!

12/12/14 - Tom up in Scotland using the NERC facility to do some stable isotope analyses on his ants. And, presenting about colour in ants next week at the IUSSI meeting in London. 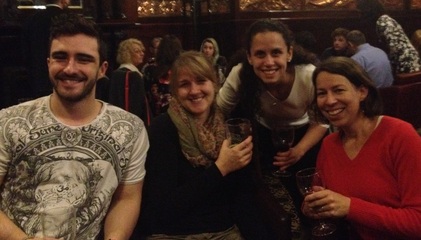 28/11/14 - Leaving drinks for Monica at the legendary Philharmonic!
17/11/14 - Monica Leitner from South Africa joins us for two weeks to write up some results on a super-cool decomposition experiment spanning wet to arid savannas.

8/11/14 - James and Kate joined some lovely folk in Tanzania for a Leverhulme funded workshop on fire and biodiversity in the western Serengeti. Much fun was had in the sun. Plenty of ideas and some good plans made!

4/10/14 - Kate off for another field trip to Maliau in Sabah, Borneo. This time starting the ant and termite suppression experiment in old growth forest.
Ananza Rabello from Brazil joins the lab for a year. Welcome, Ananza!

1/10/14 - We have a new lab member! James Probert will be working on fire and large mammal herbivores in the western Serengeti. Sounds tough, eh? 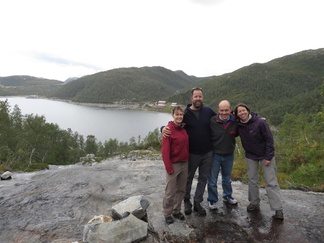 
L to R: Heloise Gibb, Nate Sanders, Rob Dunn, KP
6/7/14 - Funky Ant Lab heads Down Under for visits to CSIRO in Darwin, and then IUSSI and ATBC conferences in Cairns. Looks like fun times ahead!

25/4/14 - Kate gives seminar and chats to students at University of Copenhagen. Enjoyed the science discussions, meeting folk (including the Little Mermaid) and cycling through the city.

16/4/14 - Our TREE paper on threats to tropical grassy biomes featured by Scientific American. Plus there is a bonus slideshow! 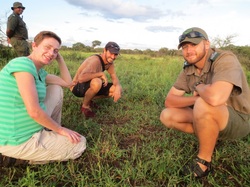 
The Fire & Herbivory Program group admiring grass: (L to R) Happy, Sally, Gareth and Drew
5/3/14 - Tom gives a great seminar at the University of Pretoria and Kate is visiting the South African part of the Funky Ant Lab.

1/2/14 - Andrew starts a post-doc with the Carnegie Airbourne Observatory at Stanford University. Congratulations Doctor! We will miss you.

27/1/14 - Kate back from fieldwork in the Drakensberg Mountains and Kruger National Park, South Africa. More ants than you can shake a stick at!!

9/1/14 - Fieldwork season in South Africa! Monica set to check her decomposition experiment and Kate & Tom off to the Sani Pass in the Drakensberg Mountains.

6/12/13 - The Funky Ant Lab says goodbye to Nic Plowman who has been visting from from the Laboratory of Ecology & Evolution of Social Insects, University of South Bohemia. Hope to see you back again!

28/11/13 - Kate visited the National University of Ireland, Galway, to give a seminar.  Thanks for the great hospitality.

14/11/13 - Thank you to the British Ecological Society! We have been awarded a Small Project Grant to work on savanna ant recolonisation and reassembly in South Africa.

5/11/13 - Kate at NERC project meeting in Aberdeen (Biodiversity and Land use Impacts) and in Edinburgh talking about savannas in Asia with Caroline Lehmann.

25/10/13 - Tom waxes lyrical about weaver ants (Oecphylla spp.) at the Manchester Science Festival. A star in our midst. 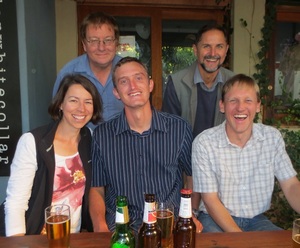 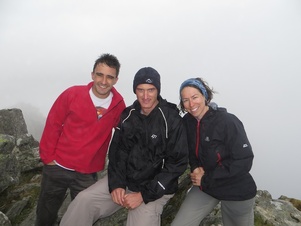